I Don’t Like This World, I Only Like You Chapter 6.1: One’s Lifetime is Extremely Long; Thus One Ought to Spend it with Interesting People

Posted on November 27, 2015 by dramasbooksandtea 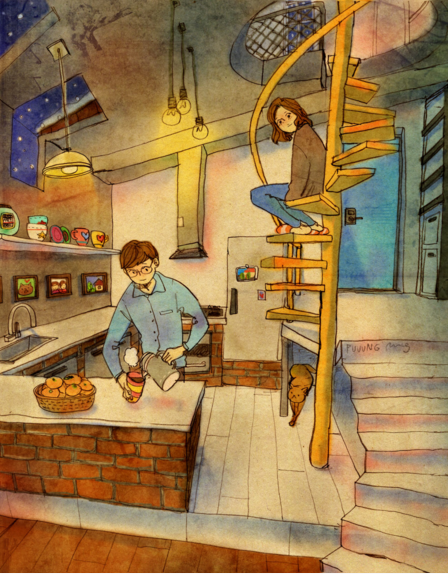 Chapter 6 of I Don’t Like This World, I Only Like You returns the focus of the story to Joey and Mr. F’s relationship, where Joey tells us interesting tidbits on how Mr. F and her inject small jabs of humour into each other’s life. The small nature of these incidents highlight how life can be well-spent and filled with joy through the tiny actions and reactions of one’s loved ones – Joey doesn’t need Mr. F to shower her with expensive gifts or extravagant jewellery; all she needs is someone who understands her, appreciates her humour and returns in kind.

During winter last year, I bizarrely contracted a bout of dermatitis.

I immediately felt that there was no more meaning in life.

“What’s the point in living any longer? After all, the main purpose of living in this world is to eat.”

He glared at me, “Could you have more ambitions in life?” Under Mr. F’s supervision, our house would definitely qualify for the Environmentally Friendly House Award. The table was filled with all sorts of vegetable dishes, and I ate till my vision was turning green. He took pity on me, and finally relented, allowing me to eat some pork meat.

That night, he cooked a plate of flavoured pork, and I was so touched I nearly cried when I was eating the pork meat. I told him in all earnestness, “I feel that the only thing that can make people feel an immediate sense of bliss the moment they lay eyes on it is a plate of meat.”

Finally, I managed to recuperate after an entire winter. As I had scratched the wounds, there were some scars on my calf. When I wore shorts in summer, my friends noticed the scars and inquired about what had happened.

I glanced at Mr. F, and told them in a pitiful tone, “Because I wasn’t obedient, I was punished with domestic violence.”

He was stunned momentarily before putting on a straight face and retorting, “Didn’t I warn you not to tell anybody? I’m going to punish you again when we reach home.”

Hahahaha I didn’t manage to keep in my laughter and immediately burst out laughing.

On the day when Mr. F and I held our wedding ceremony, he was forced to drink a pretty large amount of alcohol – mainly because he kept shielding me from the excessive drinks. As a result, he had to drink all the drinks that were originally meant for me.

When we went round giving our toasts, he held my hand extremely tightly. I laughed at him, asking whether he was worried that I would run.

He nodded his head seriously, and told me that of course he was worried as it wasn’t easy for him to finally ‘catch me’. I told him not to worry as I wouldn’t run – not unless Jay Chou came to disrupt the marriage.

Subsequently, when this guy had too much to drink, his icy image was entirely changed. With a glass of alcohol in his hand, he slurred, “I’m tremendously happy today… Is there anybody who can help me pass a few words? I’m extremely, extremely grateful to Jolin Tsai and Patty Hou – you two must enjoy a very good relationship with Jay Chou…”

The people seated around him, including me, all burst into laughter.

A few days before my wedding, my best friends conducted a bachelorette’s party for me. Mr. F frequently ticked me off for transforming into a lunatic whenever there’s a crowd – and rightfully so. Whenever a huge bunch of good friends are gathered together, I’d be especially excited. Once I start getting excited, I’d always look for beer and other forms of alcohol. If I recall correctly, I was constantly toasting everybody that night – regardless of whether it was red wine, beer, cocktails or champagne, I drank all of them indiscriminately. At long last, I predictably collapsed and passed out.

The next day, I drifted in and out of sleep before finally waking up at 4:00PM. When I got up, I asked Mr. F, “Did I drink too much yesterday?”

He nodded his head. “I… I wasn’t embarrassing, was I?”

He replied, “It’s too painful to recall.”

“You grabbed the microphone and hollered at the service staff, asking them to bring their prettiest ladies to your room. You also forced everyone to praise your beauty, and you even apologized to Jay Chou’s picture, telling him that you’d definitely marry him first in your next lifetime…”

I buried my head in the pillow, having absolutely no confidence to continue listening to Mr. F.

“But the most embarrassing person isn’t you, it’s Guan Chao.”

“We expended huge amounts of effort to coax you to return home. However, you suddenly hugged Guan Chao and started wailing.”

“You kept apologizing to him whilst crying, and told him that even though the man you loved the most in the past was him, you are unable to love him anymore from this point forth.”

Mr. F suppressed his laughter, continuing, “Guan Chao kept trying to explain to the people surrounding us that he’s your blood-related brother, but it only made the people staring at us look at him even more strangely…”

I can never differentiate the pronunciation for “N” and “L”.

Thus, every time I’m supposed to pronounce “Tie Ban Niu Liu”[1] I would always say “Tie Ban Liu Liu”. This is a certain person’s perennial laughing point, and whenever he gets bored, he would tease me, “Say ‘Tie Ban Niu Liu’.”

I am unwilling to concede that I’m unable to differentiate the pronunciation for “N” and “L”, after all, I wouldn’t make the same mistake over and over again, would I? As such, I would always co-operate and say, “Tie Ban Liu Liu……”

The moment I finished saying it, I’d realize that I had made the same mistake once again, while Mr. F would simply laugh for half a day.

I don’t even know what the laughing point is.

Mr. F has a genius nephew who is way too mature for his age. Every single time I see him, a picture of a young Mr. F immediately pops up in my mind, inciting in me an irresistible urge to play a prank on him. “I heard that you placed the Mission of Oxford University at the top of your bed?”

The little genius replied, “I have now changed it to Harvard’s.”

“Not planning to go to England anymore?”

The little genius replied me extremely sternly, “The water quality in England isn’t very good; long periods of stay will result in a greater propensity of balding.”

I silently glanced at Mr. F.

The little genius took this opportunity to confess to his favourite uncle whom he idolizes, “But I still really like Uncle F’s school.”

Mr. F patted the head of the little genius, commenting that he had great taste.

“My mum said that it is extremely difficult to enter Uncle F’s field of study.”

I teased him, “It’s not really that difficult, what’s more important is your looks.”

I replied seriously, “There’d be an interview, and the Professors basically select those whom they think is good looking.”

“Of course this is true.”

The little genius’s view of the world was experiencing a great upheaval, and he turned to Mr. F with tears in his eyes, “Is it really all dependent on looks?”

He continued, without a change in expression, “Sometimes it also depends on who wins rock-paper-scissors.”

Mr. F has truly been led astray by me in recent times – Ah, he used to be such an upright (boring) person.

I have a strange habit – every single time I go to the toilet, I must have a book in hand. Mr. F often ridicules me, “After graduating, the place where you receive your education has changed from the school to the toilet bowl.”

There was once I forgot to take a book along with me due to the urgent nature of my ‘business’; as a result, I took the shampoo bottle and read the instructions line by line, until I finished reading the instructions.

When I came out, I asked him whether it was possible to put a bookshelf next to the toilet bowl.

He rolled his eyes at me. “Never.”

“Who said that a bookshelf can’t be placed in the toilet anyway?”

“There’s absolutely no room for discussion?”

Suddenly, an idea struck me, and I told him, “I thought of a perfect solution.”

He smirked coldly, “If you’re thinking of saying that you would simply place a toilet bowl in the study room should I refuse to agree to your suggestion, then you can forget about it.”

He slowly added, “The sneaky ideas that you’re thinking of right now – I can detect them from two streets away.”

Enraged, I could only swallow my words in anger.

I couldn’t believe that he actually managed to guess correctly…

Last week, I accompanied Mr. F to his company’s dinner. As the Big Boss from his Company was in attendance, I didn’t dare to make any rash moves, and was on my best behaviour the entire time.

Somehow, the Big Boss knew that I had enrolled in the Mandarin field of study in my university, and asked me to create a reading list for his daughter.

“The books my daughter reads are all about males and females who do nothing but fall in love with each other – don’t they ever need to work? Don’t they ever face any societal pressure? It’s absolutely ridiculous.”

I agreed meekly, lying through my teeth, “The books I usually read comprise of extremely profound literature.”

I then proceeded to discuss the Stendahl style of writing and the distinguishing features of books written in the Victorian era with the Big Boss.

As a result, during the dinner, I felt as though I had returned to my time in University when I was answering questions about my thesis during my presentation.

On my way back home, I expressed my thoughts to Mr. F, “Your boss is an extremely difficult character to entertain.”

I inhaled a sharp breath – that person was a celebrated literary icon! When I was young, I was even forced to memorize his essays!

“Then my performance during the dinner – wasn’t it just me showcasing my incompetence in front of the real expert?!”

“Not exactly, but… ‘The books I usually read comprise of extremely profound literature’? I wonder who was the one who stayed up the whole of last night to read chick-lit?”

I replied calmly without flinching, “I have no idea, maybe it’s your mistress?”

This entry was posted in Book Recap, I Don't Like This World I Only Like You. Bookmark the permalink.

21 Responses to I Don’t Like This World, I Only Like You Chapter 6.1: One’s Lifetime is Extremely Long; Thus One Ought to Spend it with Interesting People